A ton of great movies have been filmed in San Francisco, it's a fantastic location. The hills, the harbor, the Golden Gate Bridge and the cable-cars all provide a lot of production value to filmmakers. While not perhaps as iconic as Los Angeles or New York when it comes to film, San Francisco has nevertheless carved out a powerful celluloid role for itself, particularly when it comes to thrillers and action movies. So, allowing for the fact that some not-so-great movies have been made here too, here's our list of 15 movies filmed in San Francisco that you should make a point of seeing either before, after or during your visit.

A film-noir classic that used our famous Telegraph Hill (home of Coit Tower) as a key location. Richard Basehart tries to gas-lamp Concentration Camp survivor Valentina Cortese (who has a big secret of her own) in this post-war thriller that has a strong Hitchcockian feel.

Talking of Hitchcock, the great film director... Though not generally considered a film noir director, in many ways Hitchcock was one of it's finest exponents - especially with Vertigo. Femme Fatale, check. Conflicted leading man (Jimmy Stewart, no less), check. Dastardly crime involving an insurance scam, check. Private Investigator, check. Vertigo has all the ingredients of the genre and then some. Is it Hitchcock's greatest film? Very possibly. Should you see it? Absolutely. For another famous Hitchcock movie set in San Francisco, watch The Birds (1963).

In this taut, revenge, neo-noir thriller (clocking in at just ninety minutes), directed by John Boorman, Lee Marvin hunts down the treacherous criminal partners who had left him for dead, one by one. The film opens and closes at Alcatraz (not long after the penitentiary closed), although most of the movie was shot and filmed in Los Angeles. Director Boorman brought a host of diverse influences to his first Hollywood movie, including a hefty dose of French New Wave, creating a dazzling masterpiece.

One of the most famous movies ever to be filmed in San Francisco, Bullitt was the perfect star vehicle for possibly the biggest star in the world at the time. Has the city ever looked more cool than when Steve McQueen was chasing criminals though its streets in his Ford Mustang? If watching this movie doesn't make you want to visit SF then nothing will (but please don't drive like Steve - you will get pulled over).

Another iconic San Francisco movie, starring Clint Eastwood in arguably his signature role. The movie is loosely based on the real-life case of the Zodiac Killer, and used a whole host of famous SF locations, including City Hall, Fort Mason, Lombard Street and Saints Peter and Paul Church. Its politics, especially now, feel dated, but its still a hugely influential piece of entertainment, spawning a whole sub-genre of "loose-cannon cop" movies (see 48 Hours below).

Talking of spawning... This is one of those rare cases where the sequel is widely considered superior to the original - and not only because the 1978 version was made in San Francisco. A truly terrifying take on the Alien invasion genre, you may not want to see this before visiting SF, but it's a great movie.

A mash-up of the "buddy-buddy", "loose-cannon cop" and action-comedy movie genres, 48 Hours is a wildly entertaining movie, with career best performances by Eddie Murphy and Nick Nolte. Downtown forms a memorable backdrop for the bickering of the two stars and the action sequences.

"My name's Bond. James Bond." That's right the original franchise action movie filmed this entry in the series in San Francisco. It was the last appearance in the iconic role for Roger Moore, and at fifty-eight years old he has admitted himself he was waaaay to old for the part, but the movie's still an enjoyable romp, made all the more memorable for its use of several SF locations, including the Golden Gate Bridge for its denouement.

Another Hitchcock-influenced thriller set in the hills of San Francisco, this one stars Melanie Griffith, Michael Keaton and Matthew Modine (remember him?). Pacific Heights is a real SF neighborhood, that now has some of the most expensive real estate in the U.S. - and some fantastic views of the Bay (partly explaining the high land valuation), however you may feel differently about airbnbing your spare room after watching this movie. By the way, the house used in it isn't actually in Pacific Heights... 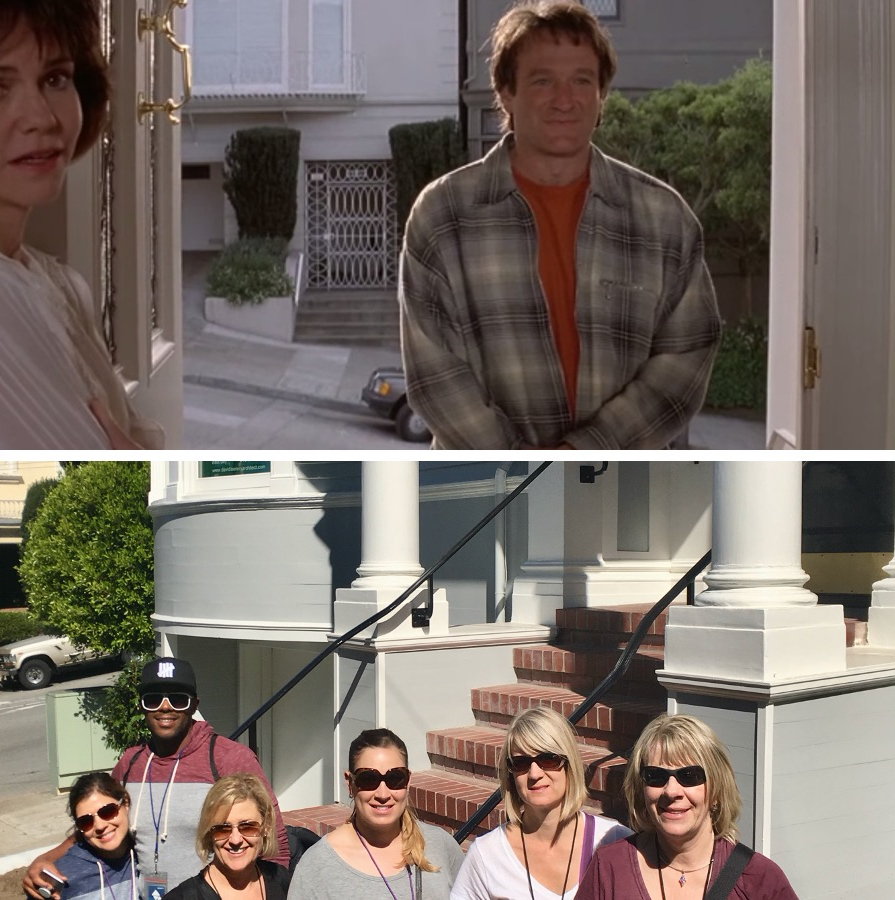 The perfect star vehicle for the manic energy and talent for physical transformation of the late, great Robin Williams, Mrs Doubtfire was a big hit at the time and is still a hugely popular family movie - no list of movies set in San Francisco would be complete without it. Surely only Williams' improvisational comedy could be a match for James Bond (Pierce Brosnan, in one of his best known pre-007 roles).

We change buses right outside the house used in the movie on our SF in a Day tour.

An under-appreciated film, made by acclaimed director Peter Weir, Fearless tells the story of a man (the excellent Jeff Bridges) who survives a deadly plane accident and becomes an adrenaline junkie. The movie uses several downtown locations (which Bridges' character is considering jumping off), but don't watch this movie before coming to San Francisco if you're planning to fly!

This hugely enjoyable 90's action-movie gets its name from its main location - Alcatraz. Sean Connery portrays an ex-SAS soldier who has to help Nicholas Cage's FBI chemical expert take on Ed Harris' crack mercenaries, to stop them detonating a devastating weapon of mass-destruction over San Francisco. You won't be surprised to learn that in the end they're successful, but it's very satisfying to see how they do it.

A clever psychological thriller, from that master of the genre, David Fincher, The Game follows Michael Douglas as a rich banker who is forced to partake in a weird, immersive, mysterious game which increasingly crosses the line into his real life. Sean Penn plays his brother and the movie makes full use of San Francisco's hills and old mansions to create a very unsettling atmosphere, full of unseen menace.

Milk is a quintessential movie about San Francisco, telling the story of Harvey Milk the gay-rights activist who became the first openly gay person to be elected to public office in California. His story is a crucial element of the fight for LGBTQ+ rights, especially in San Francisco and the U.S., and the role won Sean Penn the best actor Oscar that year.

We finish our list of movies set in San Francisco with a pair of recent movies based on popular Marvel comic-strips, Ant Man and Venom. Both of these movies are premised on the Bay Area's hugely important hi-tech sector and both use a host of San Francisco locations, including North Beach, Chinatown and the Financial District. Could San Francisco be carving out a new role for itself as a backdrop for Superhero movies? Both franchises are expected to release new entries in the series over the next couple of years.

This map is interactive. To open in Google Maps, click the icon in the top right corner.